Test and review of Razer Phone 2: first-class gaming smartphone at a high price

Razer Phone 2 during the test was not a smartphone for everyone. His target audience is gamers. Like his predecessor, he has a 120 Hz display and a special cooling system. But what is it inferior to the flagships. 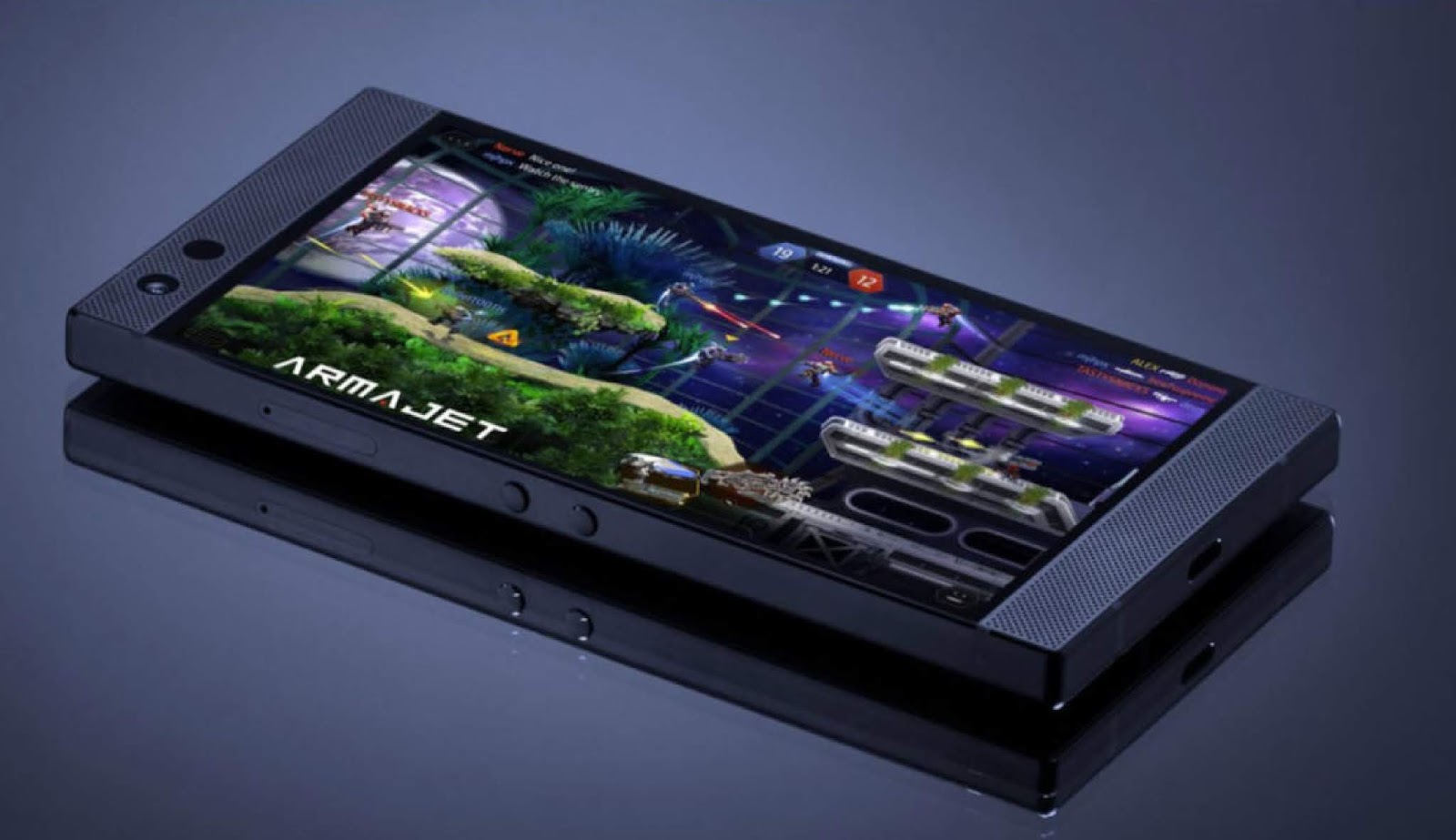 Product Output:
As the tests showed, “non-gamers” in the expensive, narrowly focused Razer Phone 2 smartphone will lack something. The display, battery and camera can not be with other top devices. And although the performance is wonderful, it does not set new records.

Razer is a manufacturer of gaming peripherals, advertised at events in the field of electronic sports and consistently focuses on “computer” gamers as customers. Accordingly, the “other” is also the design aesthetics of smartphones produced by the company, as the first Razer Phone has shown by its example. While other smartphone makers are betting on the maximum display area and comfortable rounded edges of the case, the Razer focuses on functionality: the Razer Phone 2 has sharp edges and corners, as well as thick frames.
Because of this, the design of this gaming smartphone may seem cumbersome to some people, especially when compared with the roundness of the Samsung Galaxy or Huawei Mate. But in a certain “beauty in simplicity” Razer Phone 2 can not refuse. The quality of the performance of the smartphone is wonderful, and it looks very durable. At the top and bottom of the screen are two grids, under which the stereo speakers are hidden. This projecting “radiator grille” is not obligatory – but here it is in place.
For all this, there is one good reason: Razer comes primarily from the considerations that the gaming smartphone most of the time in the hands of the user does not spend in an upright position, but horizontally and holds his hands on both sides – the framelessness of the screen during gaming would only interfere. 5.7-inch smartphone in his hands lies well, despite the sharp edges, or even thanks to them. The only decoration is the illuminated Razer logo on the back. He has, as could not be otherwise, RGB-color adjustment, allowing you to choose an individual color. In addition, if desired, the logo can give color signals. 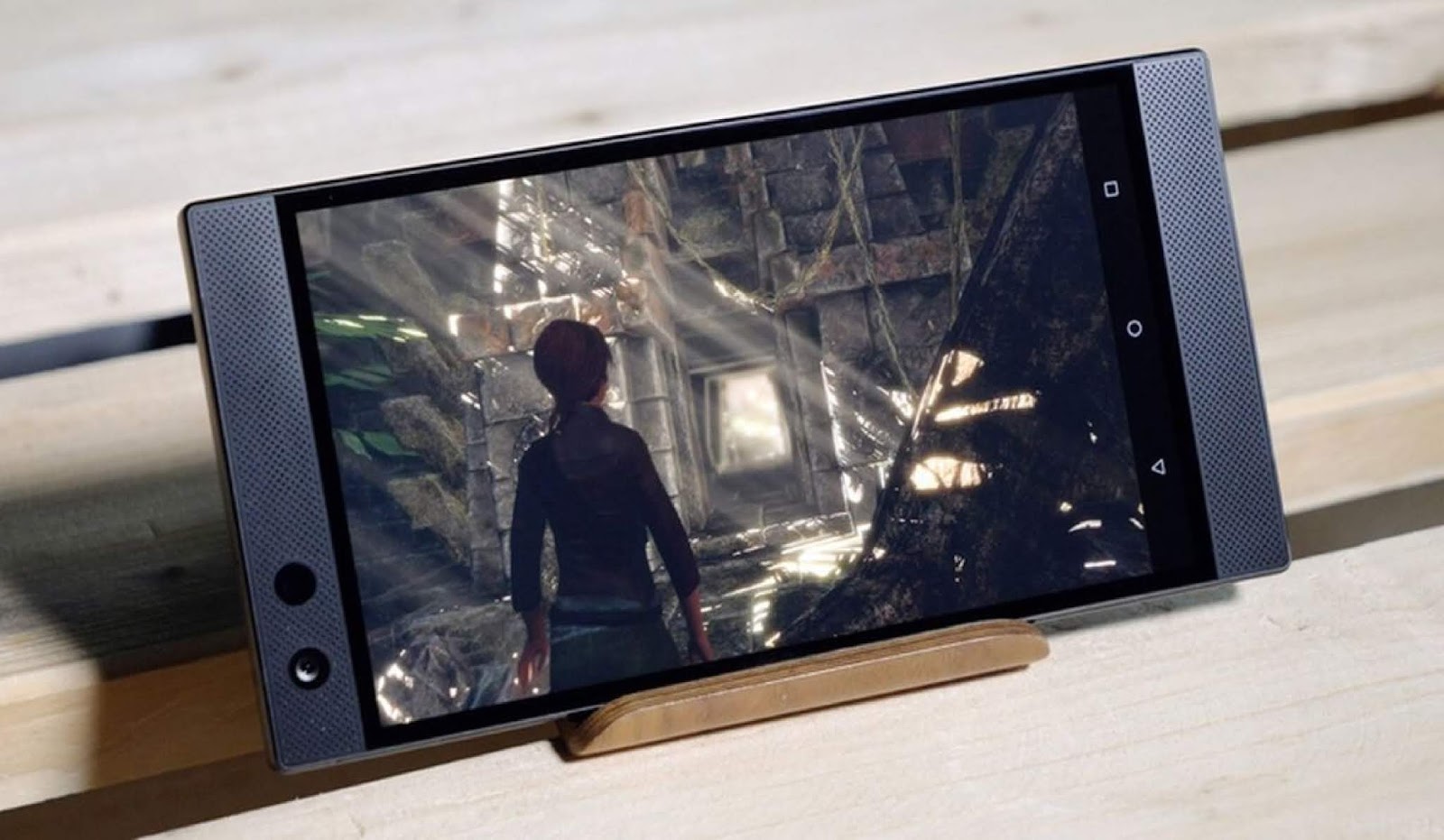 Like its predecessor, the Razer Phone 2 has a 120 Hz display – in this sense, it is one of a kind. Even other gaming smartphones offer a maximum of 90 Hz, and “ordinary” – only 60 Hz.
However, not all applications can actually produce such a high frame refresh rate, and some even have a limit of only 40 frames per second. The company Razer has published a list of games for mobile phones that support operation at a frequency of 120 Hz. But because of the relative exclusivity of the screens, this choice cannot be called big.
Even if the display of the Razer Phone 2 in terms of the frequency of updating the picture is a completely new sensation, the quality of the image itself has not undergone much progress. Here you can see the LC display with a resolution of 2560×1440 pixels, which, of course, compared to the widely used AMOLED screens, has disadvantages in terms of color space coverage and maximum brightness level. However, the latter has been improved relative to the previous model and now makes up a pretty good 506 cd / m2, and the contrast is acceptable here. And yet, in its price category display Razer Phone 2 has one of the worst ratings. What is suitable for gaming, then multimedia is suitable only conditionally.
Test and review of Razer Phone 2: a first-class gaming smartphone at a high price. The desired screen refresh rate of the Razer Phone 2 is tuned, and the jump from 60 to 90 Hz becomes noticeable when used.

For gaming, a display with a high refresh rate is one thing, and the performance of the processor and graphics system is another. Here, although in the Razer Phone 2, everything is done correctly and to achieve the highest performance, a fast Qualcomm Snapdragon 845 processor is used, but still it is installed in other smartphones. Indeed, it was not possible to stand out against the background of the Razer Phone 2 during our tests. The power of the gaming device is approximately at the same level as that of other flagship Android devices, and the OnePlus 6T even surpasses the model we tested. This is not bad, but not impressive.
The memory of the Razer Phone 2 is a luxurious 8 GB, which only the one-plus OnePlus models mentioned above and gaming smartphones from other manufacturers can boast. Thus, here the “bottleneck” can not wait. Razer Phone 2 has one specialized function, namely Vapor-Chamber-cooling. It prevents the mobile phone from becoming too hot while the resource-intensive system of the gaming application is running, and because of this the processor lowers the clock frequency. Thus, the game remains stable all the time.

Gaming smartphone with deficiencies in equipment

In the field of equipment, Razer decided to save a little, which can partly be explained by the peculiarities of the target audience of the product, but in a sense it looks somewhat strange. For example, there is no Dual-SIM function, but for a gaming smartphone, this is most likely not a significant drawback. On the other hand, some users may miss the 3.5-mm audio jack for connecting wired headphones, which one could have expected to see in a mobile phone for gamers, which also turned out to be so massive. A special adapter for Type-C-USB-3.1-connector is still part of the package. In addition, Razer has installed stereo speakers here. Their sound quality is really outstanding.
Causes questions small size of internal memory. Razer Phone 2 is available in the form of only 64-gigabyte model. First of all, in the case of smartphones, on which in most cases several games must be installed, this approach seems counterproductive. Competitors in the gaming field, and simply the top Android models already have 128 GB or more as standard, or the manufacturer offers a choice of several options. But the drive Razer Phone 2 can be expanded with a memory card. In contrast to its predecessor, this gaming smartphone now has protection against dust and moisture, which corresponds to the standard IP-67. The fingerprint scanner is located in the power on / off button.
The quality of the camera, perhaps, is also a criterion, which is connected mostly with the life-style smartphones, and in gaming mobile phones it does not have to be in the center of attention. The 12-megapixel camera Razer Phone 2 is high-quality and, in particular, has a well-functioning optical image stabilizer. However, the quality of photos of other top models, this gaming device does not reach. Video can be recorded in 4K resolution. On the front side there is an 8 megapixel selfie camera.

Test and review of Razer Phone 2: a first-class gaming smartphone at a high priceLack of equipment, but good quality photos

A little disappointing is also the length of battery life. In demanding gaming applications, of course, you need to measure everything on a different scale, since the battery empties really fast. And yet, even the endurance in normal operation, according to which we measure the characteristics of all smartphones, the Razer Phone 2 was only 9 hours 07 minutes. This is unexpectedly small, since the gaming mobile phone has a powerful 4000 mAh battery. Many competing devices last at least 10 hours, and in some extreme cases even 16 hours. Also, the “quick charge” of the Razer Phone 2 lasts much longer than other devices. Inductive charging, however, as with its predecessor, is possible.

Plenty of power for a high price

Whether the reason for this is a 120 Hz display, a special cooling system or stereo speakers, in any case, Razer asks for a high price: its gaming mobile phone costs about 65,000 rubles. Razer Phone 2 is actually a special case for hardware that is not represented in other smartphones. However, the high cost is a real fly in the ointment for Razer fans. And yet, for those who are looking for a mobile phone specifically for demanding games, it makes sense to think about purchasing a Razer Phone 2. “Normal” users will not be confused by it.
New Razer Phone 2 will soon appear in the Russian retail.